I absolutely love the heart, the mind, and the crazy personality of Ray Comfort.  He literally eats, sleeps, and breathes the Gospel.  When he’s riding his bike, he’s got tracts in his pocket.  When he’s swimming in the pool, he’s got tracts in his pocket.  He is consistently carrying something with him in order to share the good news of Jesus Christ with those he meets, and Ray’s wife Sue says he hasn’t left the house without Gospel tracts for decades.  In fact, Ray is known for his original and expressly unique Gospel tracts which he hopes will equip believers with tools to make the task of evangelism easy and effective.

As the Founder and CEO of Living Waters Ministry, Ray Comfort wears a number of hats.  He is first and foremost an evangelist who recognizes the need for the lost to understand sin, righteousness, and the judgment to come before they can appreciate the free gift of salvation.  Instructing others through The School of Biblical Evangelism he continues to educate more than 16,000 online students worldwide.

The Living Waters YouTube channel reaches over 55 million and his Facebook page has over half a million likes.  Additionally, he is the bestselling author of more than 80 books, including God Has a Wonderful Plan for Your Life and The Evidence Bible.  His booklet The Atheist Test has sold more than a million copies.

For many years, Ray co-hosted  the award-winning television program, Way of the Master, which continues to air in almost 200 countries.  He also serves as the Executive Producer of 180, Evolution vs. God, Audacity, and many other films which continue to impact souls for Christ.

GETTING TO KNOW RAY COMFORT

When you go into Ray’s office, you’ll find it filled with all kinds of gags and pranks that he thoroughly enjoys using on his guests.  For example, he’s literally got all his ducks in a row, and they’re all nailed down!  I remember the first time I went on his television show.  When I told my friend Mark Spence, who works with him, that I was going to foil Ray’s spider prank, Mark let Ray in on the joke, and he got me back!  See it for yourself here:

Ray is extra special in my life.  If you’ve seen my testimony, God’s Glory, you’ll know that I grew up in a Christian home and had become a product of the Christian environment, rather than a true disciple of Christ.  It was through Ray’s message, “Hell’s Best Kept Secret,” that I finally realized I wasn’t a true disciple of Christ.  So I’m eternally grateful for his life, his friendship, how much he loves other people, and how much he’s willing to give and invest in them.  Only eternity will reveal how many souls have been saved, babies rescued, and lives impacted through the faithful witness of Ray Comfort and his team at Living Waters.

In 2012, I was thrilled to be part of a show on TBN with Ray Comfort and Ken Ham, which ended up being a fantastic discussion about the authority of the Word of God.  When we were wrapping up our thoughts, Ray commented profoundly,

“Look, at the end of the day, all of us are going to have to jump out of an airplane.  It doesn’t matter how old the airplane is or how young the airplane is.  What matters is, do you have your parachute on?”

To me, that conclusion really identified Ray’s entire life’s focus and heart to see people repent and trust in Christ.  At the end of the day, nothing else matters. 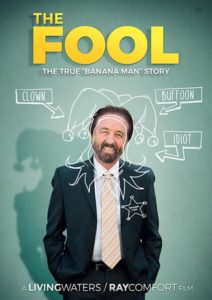 As you can imagine, I’m really excited about Ray’s new movie: The Fool, which brilliantly portrays Ray Comfort’s life and ministry.  Watching a preview recently, I was completely blown away by how much God has accomplished through Ray Comfort and how many people God has allowed him to reach during his life.

One of the many things that shows Ray’s heart  is his willingness to give stuff away!  His mission-minded organization Living Waters has given away over 200,000 copies of Darwin’s Origin of Species, which also contains the Gospel, to students at the top 100 U.S. universities.  And they give movies away, too, absolutely free!  They’ve done this with other films and they’re doing the same with his new movie, The Fool.  Selling the movie for a little while helps them cover the cost that it took to produce the movie, then they give it away so that it reaches multitudes with the Gospel of Jesus Christ!

There’s only one Ray Comfort in the world, and that’s exactly how much the world can handle!   Lovingly, continually sacrificing himself, including his own pride, in order to allow the Gospel to be proclaimed, Ray Comfort is an incredible example to us all.  For him the words, “this world is not my home” is a living reality.  Over the years he’s been my dear friend and someone from whom I have received unbelievable wisdom and counsel.  I’m eternally grateful for the life and ministry of Ray Comfort.

The Creation Network is exceedingly thankful for Ray Comfort and his team at Living Waters as they continue to reach the lost with the Gospel.  Please commit to praying for them and their current needs:

The Creation Ministry Spotlight is a forum to recognize and thank members of the Creation Network who work to support and further the Creation message. www.CreationNetwork.org