For over ten years, the Cornelius family traveled the country preaching the Gospel in 24 states until they were called to direct the Discovery Center in Abilene, TX, a Biblical Museum which has spread the creation message to thousands.  Recently an exciting new wing of the museum was opened with displays depicting 4,000 years of Jewish history. . .
THE CORNELIUS FAMILY
Before becoming a creation speaker, Paul Cornelius served in church positions of music, youth, and pastoral leadership. Receiving his Bachelor of Science from Cumberland College, Paul also completed Masters work with Andersonville Seminary, worked for the State of Texas as a Certified Drug Prevention Specialist, and served eight years in the United States Air Force.  As a veteran of the Gulf War, Paul spent time in Kuwait, Saudi Arabia, and Turkey.  Paul has been married to Dana for over 25 years; they have seven children of which one is married and three others are grown. Joyfully, the Cornelius family accepted the call to minister at the Discovery Center and continue to share their excitement for the many ministry opportunities it provides.
THE DISCOVERY CENTER
Located in Abilene, TX, the Discovery Center was established in 1980 by Tommy and Carolyn Walden for the purpose of teaching the Gospel of The Lord Jesus Christ.  With displays designed to provide scientific and historical evidence for the truthfulness of God’s Word, the Discovery Center exposes the myth of evolution as anti-science and atheistic in nature.  Utilizing museum tours, resources, teaching seminars, workshops, classes, special events, and a daily radio program called, “A Discovery Minute” the Center continues to impact lives with the Creation Message.  Their most recent project was a $70,000 wing of the museum dedicated to the history of Israel. 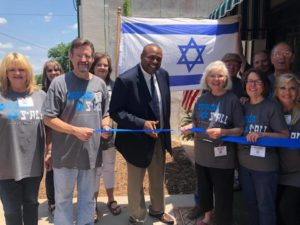 THE MIRACLE OF ISRAEL PROJECT
With a budget of $0 and a no debt policy, taking on this new project was most certainly a leap of faith.  Yet God showed up in a BIG way and the Miracle of Israel exhibit was opened on May 14th, commemorating the 70th anniversary of the independent Jewish state.  Approximately 700 people attended a special celebration at the Historic Paramount Theater in Abilene before the ribbon cutting ceremony with Abilene Mayor, Anthony Williams.
GET INVOLVED!
The Creation Network is thankful for the Cornelius family and the many opportunities they have been given to share the Gospel through the Creation Message.  Please commit to praying for their family and their ministry.

The Creation Ministry Spotlight is a forum to recognize and thank members of the Creation Network who work to support and further the Creation message. www.CreationNetwork.org