The Star of Bethlehem: Fact or Fiction?

The Star of Bethlehem: Fact or Fiction?

The celestial wonder known as the Star of Bethlehem is an inseparable part of the story of Jesus’ birth and our Christian celebration of Christmas. Early Christians along with other ancients had no problem believing in the various positions of the heavenly bodies and attaching meaning to them. Astrology and astronomy were one and the same during these times. For example, comets were interpreted to mean the death of kings, or other negative upheavals. Alignments in certain constellations portended favorable events.

Download a FREE Bible study about the wise men and the Star.

The most important visitors to see the Christ child were three “wise men,” who came from a land only described as “the East.” During that time, these were probably magi, learned astronomers who served in the courts of kings. They are theorized to have stopped in the capital cities of Judea and neighboring countries to inquire about the child: “Behold, wise men from the East came to Jerusalem saying, ‘Where is He who has been born King of the Jews? For we have seen His star in the East and have come to worship Him.’” (Matthew 2:1–9) Their question to King Herod set off events that would begin Jesus’ nomadic wanderings, then teachings. Perhaps they had heard of the long-held belief of the Jews that a king born among them would rise up to save them from the tyranny of others. An ancient prophecy stated that the King and Messiah would come from the tribe of Judah, one of 12 tribes making up the Jewish nation. The prophecy of Balaam is written in the Bible: “I shall see him, but not now: I shall behold him, but not nigh: there shall come a Star out of Jacob, and a Sceptre shall rise out of Israel …” (Numbers 2:17)

Get The Star of Bethlehem DVD

In our current intellectual “sophistication,” many seek a scientific basis for the Star of Bethlehem. Could it really have happened as depicted in song and story? There are books and web sites arguing for and against the Star’s appearance signifying the birth of Jesus, the Messiah. It has been identified as a comet, meteor, nova or supernova. More recently, researchers (archaeoastronomers) have discounted the former and most conclude that the Star of Bethlehem may actually have been a close conjunction of Jupiter and/or Venus with the star Regulus, which was a phenomenon that occurred during the time of Jesus’ birth. Several writers state that the Star appeared in the constellation of Leo (symbolizing the Lion of Judah); some say it happened in Aries, the sign that represented the Jews, and King Herod’s reign. According to Michael R. Molnar, astronomer and author of The Star of Bethlehem: The Legacy of the Magi, the ancients looked to Aries for signs that related to Judea. Much of his hypothesis is based upon his discovery of an ancient Roman coin depicting Aries the ram looking back at a star above. From the symbols on the coin, Molnar has researched pertinent dates, which he has tied to celestial events during the era.

Facts about the Star of Bethlehem

Molnar further states that his and other’s research identifies certain irrefutable qualities that all agree about the Star:

Researchers examine historical records, such as the writings of Jewish historian Joseph ben Matthias, also known as Flavius Josephus (C.E. 37/38–100), to tie in dates with the occurrence of unusual spectacles in the heavens. We know the dates that King Herod, Emperor Augustus and Quirinius governed in the Roman Empire. These are used as markers to determine the exact time of the Star’s appearance. Computer models can now replicate what occurred in the sky based on specific dates. In his book, Molnar summarizes his findings:

Jupiter underwent two occultations (“eclipses”) by the Moon in Aries in 6 BC. Jupiter was the regal “star” that conferred kingships – a power that was amplified when Jupiter was in close conjunctions with the Moon. The second occultation on April 17 coincided precisely when Jupiter was “in the east,” a condition mentioned twice in the biblical account about the Star of Bethlehem. In August of that year Jupiter became stationary and then “went before” through Aries where it became stationary again on December 19,  6 BC. This is when the regal planet “stood over” – a secondary royal portent also described in the Bible. In particular, there is confirmation from a Roman astrologer that the conditions of April 17, 6 BC were believed to herald the birth of a divine, immortal, and omnipotent person born under the sign of the Jews, which we now know was Aries the Ram. Furthermore, the coins of Antioch and ancient astrological documents show that there was indeed a Star of Bethlehem as reported in the biblical account of Matthew. (From the web site www.bethlehemstar.net)

The real meaning of it all

As well meaning as scientists are, there are simply some things that cannot now or ever be proven. Humans may be the most intelligent beings on the planet, but we can never surpass that of God. Jesus Himself chastised the Pharisees for their smug interpretation of Jewish law. They missed the very heart of it—the spirit in which the law was meant.

We must be careful to look for the deeper meanings in the Bible’s text. Author F. Belton Joyner writes: “Some people are more interested in the way the truth is wrapped than they are in the truth itself. Don’t use the Bible for INformation; use it for TRANSformation.” So it is with the Star.

The conclusion about the Star of Bethlehem: It cannot be explained by science. It was a special, supernatural light created by God just as we are, to be a celebratory sign of the birth of His Son made man. Simply put, it was a miracle of light to herald a miraculous virgin birth of the One sent to save us. Hallelujah!

Do a personal or group study on the wise men and the Star. Enter your email address and a PDF will be sent to you. *You’ll also receive weekly e-mail updates with other videos and articles. You can unsubscribe at anytime. 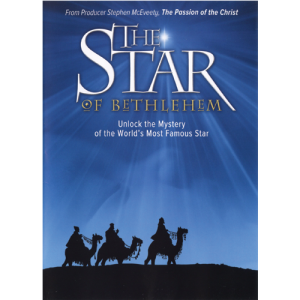 The Star of Bethlehem DVD
Presenter Rick Larson walks you through Biblical and historical clues revealing the incredible significance of this celestial event as well as the vastness of God’s creativity.