The Word of God or the WORDS of God?

Home>All Categories>Blog>The Word of God or the WORDS of God?

The Word of God or the WORDS of God?

Last October, Matt Walsh stirred up a lot of controversy when he attacked Ken Ham in a 45 minute rant filmed from his car. His reasons were a little unclear. All he seemed to communicate was, “I don’t know anything about Answers in Genesis; what they believe or why they believe it, but I know it’s wrong and those people are bad.”

Recently, during their podcast, two conservative Christian bloggers began attacking the Biblical Creation position in a very “Matt Walsh” fashion. Speaking at length over the course of two podcasts, these two bloggers jumped on the old Walsh bandwagon by proclaiming how dumb the Young Earth camp is; how we “reject Science” and “don’t understand the Bible,” and all the traditional attacks against Biblical Creation which have been handed down from hen to chick since Time Immemorial. Hearing us attacked in this manner is like hearing Auld Lang Syne sung at New Year’s Eve. It might not make any sense, but it’s a proud tradition going back centuries, so who are we to question it merely because it makes no sense?

WHAT DOES IT SAY?

What these two Christian bloggers failed to realize (and what struck me as a foundational flaw in their position) is that in order to logically validate their attack against the Young Earth/Biblical Creation position, they were ALSO forced to attack the Bible and any form of being able to understand it. The meandering thought process was,

“Genesis says THIS… but SCIENCE says THAT… which means Genesis OBVIOUSLY doesn’t mean what it says!…

“…And people who claim to know what the Bible means are dumb, because… that’s close minded and divisive…

“…Because NO ONE knows what the Bible means. And it CAN’T just mean what it says…

“…IN FACT- people who say Genesis MEANS what it SAYS are no better than people who try to distort the New Testament to say that homosexuality is acceptable to God!”

(These are not the podcasters described.)

The episode kind of fell apart at this point and they wrapped things up, but the damage had been done. I wrote them an email asking if they were playing Devil’s Advocate to get a reaction from the listening audience, or if maybe there were unusually high levels of lead in their tap water, but they replied only by mocking me on a following episode, so I gave up trying to have that conversation.

WHOSE WORDS ARE THEY ANYWAY?

One idea which was attacked at length in this podcast was the idea that the Bible is “the WORD OF GOD.” One of the podcasters attacked this idea, claiming that it was wrong since the Bible was written by MEN, and did NOT come “dripping off of the pen of God.” Also, it was argued, the Bible CANNOT be the word of God because in the Bible we find places where the DEVIL speaks, and are we REALLY going to say that the words of the DEVIL are “the word of GOD”?

This discussion made me realize that we in the church spend a lot of time saying things that we don’t spend enough time defining. I’m sure every child in Sunday School for the past thousand years has heard the Bible called “The Word of God” but if this blogger is any indication, many of those kids are not told what this means. It’s like, “Electoral College.” Sure, we’ve all heard it talked about, but hardly anyone has any idea what it is. It’s like “Climate Change”, or “Dating,” or “White privilege” or… well, almost anything shared on social media since 2003. But I digress.

When we say the Bible is “The Word of God” we are NOT saying that it contains only those words which came from the mouth of Jesus. Those are just the red letters (provided you have a “red letter Bible”).

We do not mean that God wrote all of it down on gold tablets, gave those tablets to a prophet who then stuck his face into a hat with a rock in it until the words on the tablets appeared before him and he shouted the translation to his secretary who then wrote it all down. This is Mormonism and no I am not making this up. (1)

We do not mean that an angel fell on an unsuspecting middle eastern man whose instant assumption was that he was being possessed by a demon and subsequently tried to kill himself, only to be revisited by the angel over and over as it recited the words of an eternal book, written by/coexisting with God himself, commanding it to be recited back (because the prophet chosen was illiterate and couldn’t write it down) so that he could teach it to his followers, commanding them to recite it. This is Islam and again I am not making this up.(2)

When we say the Bible is the word of God, we don’t mean that God wrote it in its entirety with His own pen, and then handed it down to some prophet or publisher. We also do not mean that it contains only words spoken by God. What we mean is:

“…no prophecy of Scripture comes from someone’s own interpretation. For no prophecy was ever produced by the will of man, but men spoke from God as they were carried along by the Holy Spirit.” 2 Peter 1:20-21 (ESV)

Men held the pen and men put those pens to paper. But those men were directed- carried along by the Holy Spirit who helped them to remember what they had seen and heard. The message was directed from above by God as the men put into words what they had seen and heard. The final books and letters which we have compiled into the Bible are the Word of God– even if they are not the WORDS of God. It was God who directed those words to be written, but not necessarily God who spoke all of those words in the events being described.

We get a nice metaphor for this in the writings of Paul. What do we mean when we say that Paul wrote the book of Romans? We do not mean that Paul held the pen and used it to put words on the first page that held that letter to the church in Rome. How do we know? Because Romans 16:22 (ESV) says, “I Tertius, who wrote this letter, greet you in the Lord.” The ideas and words were Paul’s, such that he approved and had the letter sent on. But the pen was held by the hands of a man named Tertius, and clearly this verse is entirely the words and thought of Tertius and NOT directly from Paul, but this addition does nothing to invalidate the book of Romans nor the idea that the content and teaching of the book comes from Paul.

There are many, MANY places in the Bible where we are told, “The Lord God said…” but there is a lot of narration in between these places where other people speak and act. The stories in the Bible were primarily written down by eyewitnesses recording their own history and the history of their people. God interacted with His people, and so the histories of these people include the words and actions of God. They may have had little idea how those stories are all intertwined. The men penning the first editions of the Old Testament may have not known anything beyond the surface reading of their accounts. They may not have known the ways in which all of those stories tell one grand narrative.

The Old Testament tells the story of the people of Israel- but those people are the family line of Jesus. From Creation until Christmas the Bible is following those people from whom the Savior would come. Those men recording the lives of this big family of sinners and kings and prophets and shepherds probably couldn’t see the arrow they were painting, pointing to the cross of Christ.

But GOD could see it. 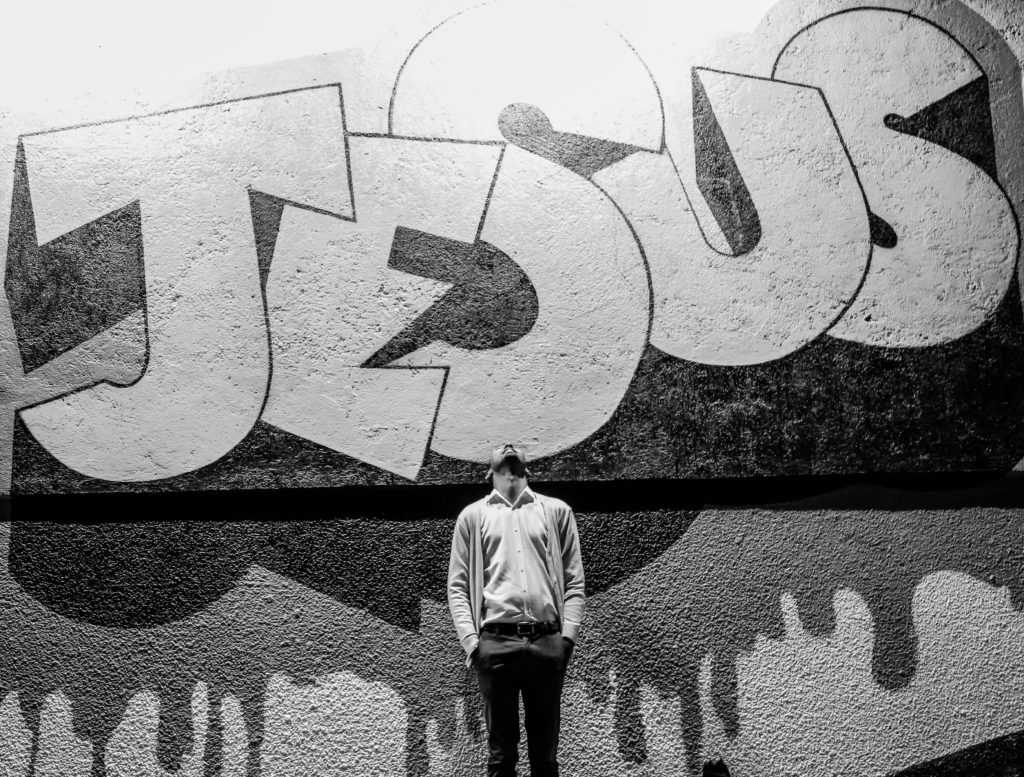 The Old Testament records important events in the lives of specific people — prophets and kings, shepherds and servant girls — and over and over they are shadows of the Gospel, whispering over and over that God was one day to step into the story as the main Character, to be the promised child, to be the fulfillment of prophecy, to be the prophet of truth, the king of the people, and the sacrifice which would pay for their sins. The men recording the history of Israel and its fathers, and its leaders and its prophets probably did not see that they were painting portraits of Jesus over and over, telling their readers in advance the story which was to come — the Gospel.

But GOD planned it all.

And from this side of the cross, we can see it too. What looked like a makeshift quilt of random people and events is, from the cross, one grand portrait of Jesus. What looks like a collection of historical events, poems, love songs, and good advice for living is, from the cross, a continual reminder that the Gospel was coming. It was foretold. It was always the destination of all of history. As history walked along, and those books were being written, we couldn’t look forward and see it clearly- but God could. And when Jesus came and paid for our sins, defeating sin, hell, Satan and death, he turned around, looked back and said, “Remember all of that? Look at it now. It’s a picture of me.”

And beginning with Moses and all the Prophets, he explained to them what was said in all the Scriptures concerning himself. -Luke 24:27 (NIV)

And beginning with Jesus’ disciples, the church has been doing the same thing- looking back at the word of God, and seeing how it was written, not only by the hands of men holding the pens, but by the hand of God- the hands of Providence which were directing not only those men, but all of human history.

“…this is how God fulfilled what he had foretold through all the prophets, saying that his Messiah would suffer.” -Acts 3:18 (NIV)

The eunuch asked Philip, “Tell me, please, who is the prophet talking about, himself or someone else?” Then Philip began with that very passage of Scripture and told him the good news about Jesus. – Acts 8: 34-35 (NIV)

As was his custom, Paul went into the synagogue, and on three Sabbath days he reasoned with them from the Scriptures, explaining and proving that the Messiah had to suffer and rise from the dead. – Acts 17:2-3 (NIV)

He witnessed to them from morning till evening, explaining about the kingdom of God, and from the Law of Moses and from the Prophets he tried to persuade them about Jesus. – Acts 28:23 (NIV)

From this side of the cross, we can look back and see that the holy scriptures were more than the words of men about God. It was God taking 2,000 years to use many writers in many places to paint one giant mural of the Gospel. The pen was held by many hands, but the final work is the work of a single Author. The Bible is truly the Word of God.