What’s Ardi Got to Do with It?

What’s Ardi Got to Do with It?

For the umpteenth time Darwinian evangelists, backed by their secular allies in the media, have announced yet another undeniable proof for the foundation of Secular Humanism, which is millions of years leading to Darwinism. Of course, all the previous undeniable proofs have been debunked – such as Ida the lemur, a splintered fossil discovered in 1983 in Messel, Germany, reassembled in 2007, and unveiled at the American Museum of Natural History in New York on 19 May 2009. 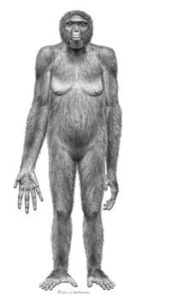 The scientists who studied Ardi stated, “It’s not a chimp. It’s not a human.” This is to say that instead of filling the role as a hypothesized “missing link” with both chimpanzee and human features, Ardi’s anatomy—as reconstructed by the scientists—shows it to be distinctly different from other apes as well as from humans. The bottom line is that Ida was totally debunked as a missing link by the very evolutionary scientists who studied the fossil bones!

Yet in a special release of Science, scientists described Ardipithecus ramidus, Ardi, as being more important in the history of human evolution than is Lucy.  I suspect this is an accurate assessment. Back in 1987 honest researchers said of Lucy:

“Anatomists have concluded these creatures are not a link between ape and man, and  did not walk upright in the human manner.” (Fossils, Teeth and Sex — New Perspectives on Human Evolution, Charles Oxnard, University of Washington Press, London, page 227).

Although the Ardi bones were first found in Ethiopia back in 1992, only now is it being touted as proof for Darwinism. The delay was due to the poor condition of the remains.  In fact, a quote from National Geographic News reports that the bones were in such bad shape they would turn to dust at a touch.

The folks holding what exists of it say Ardi is a partial skeleton reconstructed from a mixture of crushed bones from almost 40 different individuals.

This is what the Darwinian biased scientists reconstructed to come up with Ardi.

See our 50 Facts vs Darwinism on Tangle, Youtube, our website (www.CreationMinistries.Org) or on our DVDs for many examples of previous misleading reconstructions.

Despite the headline hype, honest scientists are already showing skepticism. Anatomist William Jungers of Stony Brook told NGN: “…based on what they present, the evidence for bipedality (walking upright) is limited at best. Divergent big toes are associated with grasping, and this has one of the most divergent big toes you can imagine.”

I am sure that real science will show that Ardi was just an odd ape and no more of a missing link than the many other refuted Darwinian claims.

So what does Ardi have to do with it?  Well, it reveals yet again that people must be careful to distinguish real science from biased Darwinian conjecture because claiming that Ardi supports goo-to-the-zoo-to-you evolutionism is nothing more than Humanistic propaganda.

My advice is this: Put your faith in the never-changing Word of God which tells us in Romans 1:22-23:

“Professing themselves to be wise they became fools And changed the glory of the uncorruptible God into an image made like to corruptible man, and to birds, and four-footed beasts, and creeping things.”

About the Author: Russ Miller

Russ Miller is the Founder of Creation, Evolution, and Science Ministries. His goals are to teach about creation, evolution and age of the earth issues; expose false, anti-biblical teachings; and provide a reason for the hope that is in the heart of every true Believer and every true seeker. He has authored four books and his reproducible DVDs are reaching people around the globe. Please visit www.creationministries.org to learn more.