Skip to content
Home>All Categories>Blog>Journey through Genesis: The Heavens Declare the Glory of God!

Journey through Genesis: The Heavens Declare the Glory of God!

If you have ever tried to communicate the reality of heaven and hell to someone who is not a Christian, one question you are sure to be asked is, “But what about all the people who haven’t even heard of God?” That’s actually a valid question. People asked the apostle Paul that same question, and he answered it in the first chapter of Romans.
Paul told them in Romans 1:16 that he was not ashamed of his Savior nor of the Gospel. In verses 18-20, he plainly tells them that God revealed Himself through His Creation to those who will hear–even his eternal power and divine nature—leaving all mankind totally without excuse. No wonder God made sure that the very first words to mankind in Genesis 1:1 were, “In the beginning, God created the heavens and the earth.”
Presenting Creation then it seems would close any case with an unbeliever, but people reject Genesis, the very place where God wrote the foundations of HIStory! One of the excuses given by those espousing an evolutionistic worldview is that they have a scientific reason to reject the truth of the Bible. The newly released GENESIS: Paradise Lost film spotlights many leading scientists who factually show that scientific data does not support the theory of evolution, and in fact, support Genesis chapter one, just like God wrote it.

Fellow Creation Speaker featured on the History Channel, heard on talk radio, and looked to as an astronomy expert, David Rives, has produced a plethora of articles, books, videos and TV shows demonstrating that the Creator left His fingerprints across every corner of the universe. Astronomy is one of David’s passions and our Journey Through Genesis Series would be incomplete without including his research and discoveries. Here is a sample of his work—all dedicated to proclaiming that God’s Word can be trusted as truth and that the heavens do indeed, declare His glory!

SPIRAL GALAXIES AND A YOUNG UNIVERSE
By David Rives

The Bible tells us that “the heavens declare the glory of God and the firmament shows His handiwork (Psalm 19:1).” Astronomy is one of my passions. I love looking through telescopes and seeing the incredible and beautiful things God has made and placed throughout the universe for His glory.

Researchers estimate there are at least 170 billion galaxies in our observable universe. And each galaxy is made of billions or trillions of stars. The number of stars in our universe is just mind-blowing. One type of galaxy, the kind we’re going to look at today, is called a spiral galaxy. Our own Milky Way is a spiral galaxy. These galaxies have a dense cluster of stars in the middle and arms that spiral away from that center.

Since the 1930’s astronomers have noticed a problem. The outer stars seem to take more time to complete their orbit than the central portion of the galaxy. This means that, after a few rotations, the spiral arms will lose their shape and basically disappear (as the galaxy winds up). If the universe is billions of years old there shouldn’t be any galaxies with a spiral shape left and yet we find them all over the universe, including our local group. Could this be an indicator that the universe isn’t 13.7 billion years old?

And it gets worse! The really visible arms of spiral galaxies contain a lot of blue stars. Blue stars are bright and hot and thought to burn through their fuel relatively quickly. But if the universe is billions of years old, why are there still blue stars everywhere we look? All sorts of ideas have been thrown around, from collapsing gas clouds to dark matter, and we’ve looked at those in other videos, but the Bible gives us the answer to all three of these evolutionary theory problems:

The universe isn’t billions of years old! God created the stars, and everything else about 6 thousand years ago.

I’m David Rives…Truly the heavens declare the glory of God.

What powerful scientific evidence David’s research provides to those who will know truth. Watch for some of David Rives’ brilliant, “heavenly” resources coming soon! 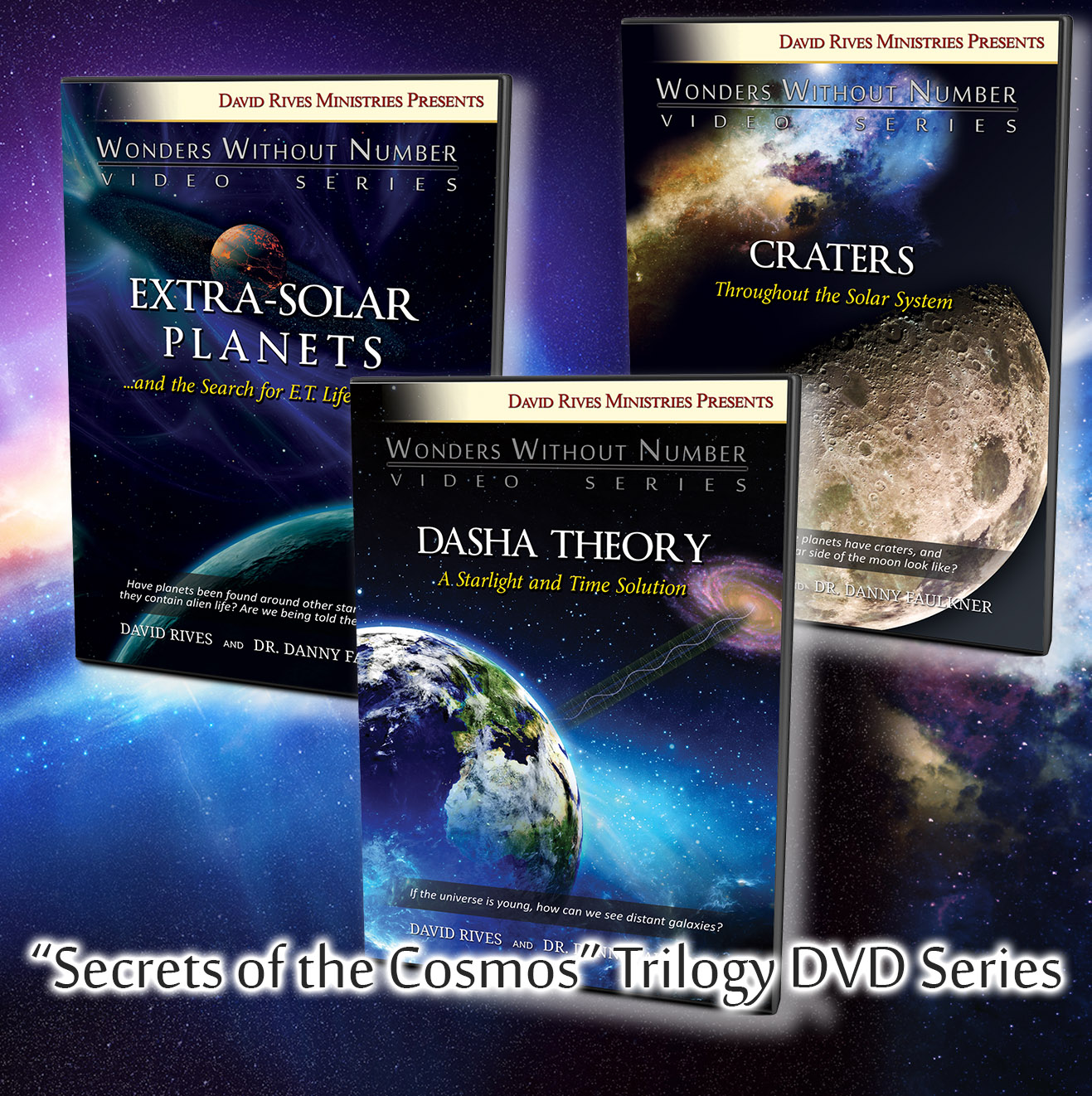 SECRETS OF THE COSMOS TRILOGY – DVD SET
As seen on TV, these DVDs have aired on GSN – Genesis Science Network. This content of the “Secrets of the Cosmos” Trilogy DVD Set was also the basis for several episodes of “Creation in the 21st Century with David Rives” on TBN. Covering topics like Starlight and Time, Extra Solar Planets, The Search for Extraterrestrial Life in Space, Craters Throughout the Solar System, and much more, this series is an absolute must for anyone desiring more than a surface understanding of astronomy! 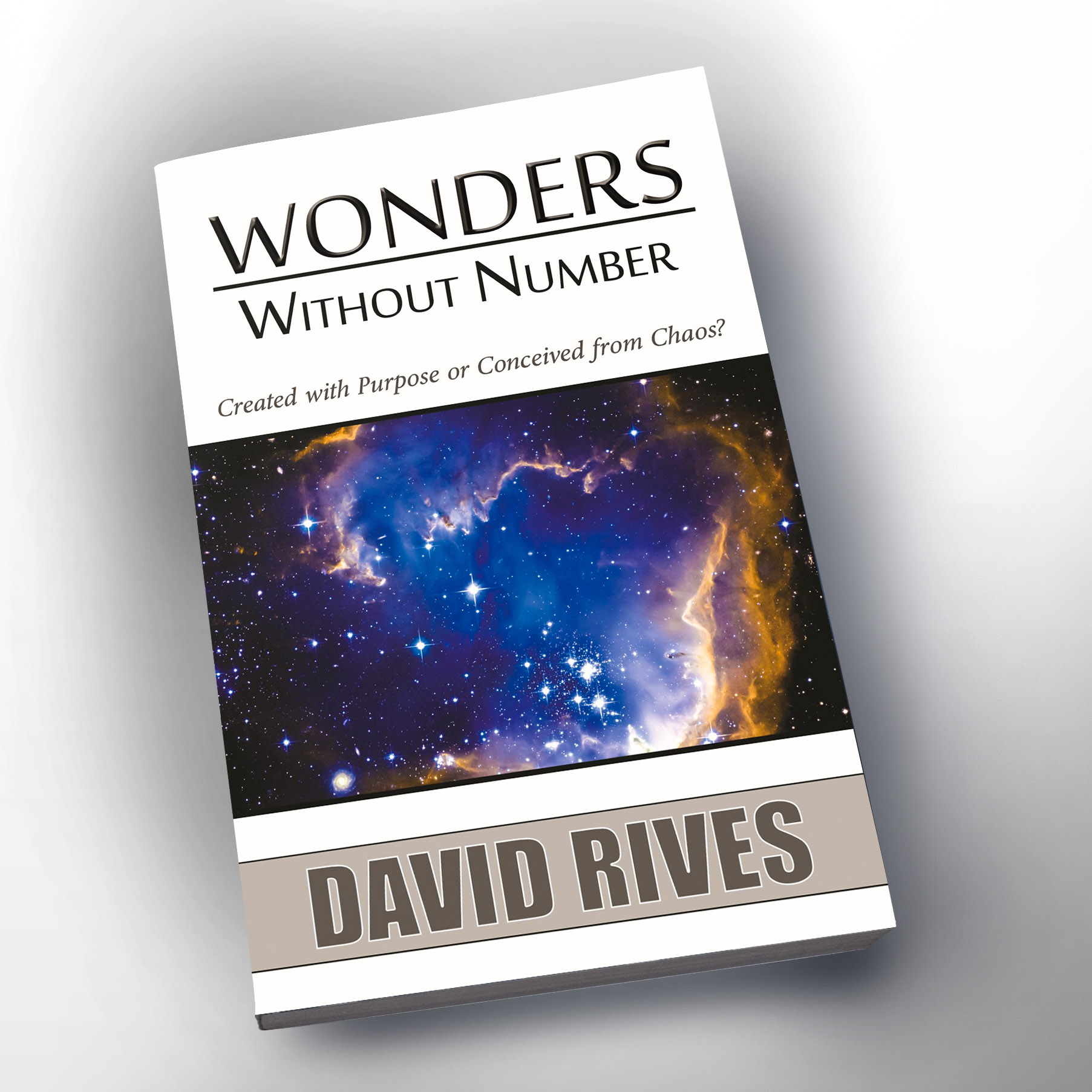 WONDERS WITHOUT NUMBER – Created with Purpose or Conceived from Chaos – BOOK
As we witness the indescribable beauty of our Creator’s Universe and consider the wonders of His creation, we begin to understand that empirical science, that which can be proven, in no way contradicts the words of scripture. In contrast to what evolutionary science teaches, we are not highly developed animals, the product of random chance. Just as the heavens and Earth were carefully designed, we are “fearfully and wonderfully made” by a loving God