After a few hours of sleep, we began our day with a piece of bread and some instant coffee for breakfast. (Not complaining; it was complimentary!) We took the opportunity this morning to see one of the tourist attractions by chartering a boat to take us out across the Paracas Bay to the Isle de Ballestos, an island just off the coast of Pisco. The Paracas people lived there from 1300 B.C to 300 A.D. and they made the most famous textiles in the world.  Because of the dry climate in Peru, these textiles are remarkably preserved today. This area is most known for the Candelabra, a massive 650-foot-tall and 310-feet-wide image in the side of one of the islands that has been dug some 6 to 7 feet deep into the surface. Today there are some questions as to the meaning of this formation and, therefore, several different theories as to what purpose it served. The guide described a few of these concepts ranging from ocean navigation lines to a symbol of worship so that the gods would bless their plants. Personally, I think it was a fabulous waterslide that the pre-Columbian people used ;-)

With the speedboat at a nice cruising pace, we made it to the islands in about 20 minutes. These islands once made Peru a world power simply because of the guano (bird poop) that was used as fertilizer, harvested off the rocks of the island. With more than 110 species of birds on the island, including the red boobies, pelicans, turkey vultures, and red-footed cormorants, this was quite a sight, as there were literally hundreds of thousands of birds on the islands. This explained where all the guano was produced!

After our expedition to the Ballestos islands our day got really exciting! In Ica Peru there is a private collection of Ica burial stones that were procured by a medical doctor named Dr. Cabrera over the past several decades, and we were about to get a private tour of these famous stones from Dr. Cabrera’s daughter Eugenia who has taken over his work since his death in 2006.  This collection consists of over 11,000 artifacts that today would be considered priceless. These stones are pre-Incan artifacts made by the Ica people who lived in this area from around 300 BC to 800 AD. We did some investigation of these stones to determine if there was a patena layer around them. Patena is the oxidized coating that develops on artifacts over a long period of time. Scientists study this to determine things like the authenticity of age or antiquity. Using a portable proscope, a portable microscope that magnifies images up to 200 times, Dr. Swift was able to confirm the authenticity of these stones, observing the patena layer both on the black of the stones as well as on the white lines that form the drawings.   This was an important find because modern skeptics of these stones claim that they were carved recently by a farmer who has admitted in a police report to making the stones to sell them.  The problem with this skepticism is that they have found over 11,000 of these stones, that’s a lot of work for a man running a farm, not to mention the carvings that are on these stones depict information that the farmer would have had no idea about. These burial stones depict brain surgery, c-sections, using magnification and telescopes, maps of coastal seas, and animals that are both alive today and many that seem to be extinct.  Take a look at these photos to see for yourself.

I can’t wait to see what tomorrow will bring. More to come…. 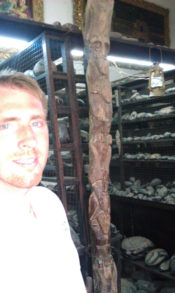