The Hebrew Yom: Taking One Day at a Time

The Hebrew Yom: Taking One Day at a Time

Are the days of Genesis 1 actual 24-hour days? Or do they represent figurative periods of time, which could be interpreted as millions of years? It is popular among many conservative evangelical scholars today to suggest the latter position. However, the former position—that the days are literal 24-hour days—is the historic position that the church has adopted since New Testament times. 1

The key to understanding what the days of Genesis 1 really mean is to look at the use of the Hebrew word for “day.” The Hebrew word is yom and it is used throughout the Old Testament, having a variety of meanings, including the possibility of referring to an undefined, indeterminate period of time, rather like our English word “day” can. However, the meaning of any word is determined by its context, so we will look at the context of this word throughout the Old Testament. To avoid bias, we will take Genesis 1 out of the picture, so our new expurgated Old Testament runs from Genesis 2 through Malachi 4. 2 Let’s now examine these occurrences one day at a time!

Yom occurs 19 times outside Genesis 1, together with either the word “morning” or “evening.” In all 19 cases, a 24-hour day is clearly intended.

The words “morning” and “evening” occur together, without “day” 38 times outside Genesis 1. Each of these occurrences refers to a literal 24-hour day.

Finally, the Hebrew yom occurs with the word “night” 53 times outside Genesis 1. Guess what! Each of these occurrences refers to a 24-hour day.

Given this immense contextual evidence, one is tempted to ask somewhat flippantly, “What could God have done to emphasize that the days of Genesis 1 are literal 24-hour days? Might I suggest that He could have used the Hebrew yom together with numbers, morning, evening or night? And that is exactly what He did!

The following is an infographic artistically displaying the significance of this word. 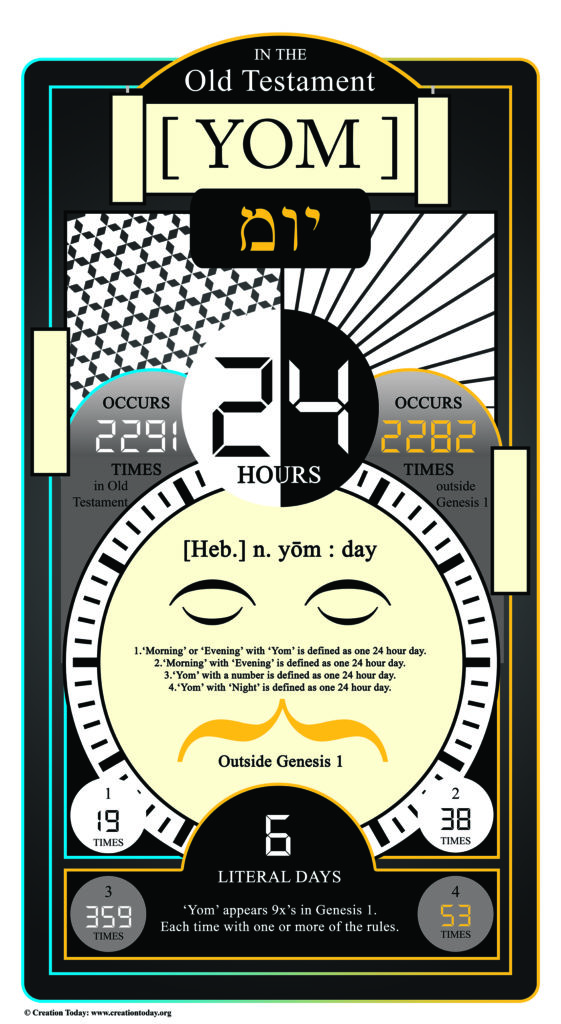