Have We Already Forgotten?

Holocaust Remembrance Day is on April 12th this year.
Lasting from 1933-1945, the Jewish Holocaust claimed the lives of approximately 6 million Jews, along with 5 million “undesirables” like gypsies, homosexuals, priests, communists, resistance fighters, people with disabilities, and many more. As we remember the victims, their families, and the gaping hole left by their absence, let’s not forget the worldview behind the atrocity.

“Those who don’t know the past are doomed to repeat it.”
—Edmund Burke

It’s hard to believe that, less than one hundred years later, our schools are failing to teach the realities, horrors, and motivations for the Jewish Holocaust. Some textbooks actually deny the systematic and state-sponsored murder of  millions during World War II, while others simply fail to acknowledge the propaganda that made it possible. 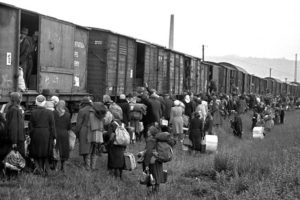 Beginning with Hitler’s rise to power in 1933, racist ideas and evolutionary teachings swept through Germany like wildfire. By the time the Nazis invaded Poland in 1939, more than 400 laws and regulations had been imposed on European Jews, tremendously restricting their everyday lives. From there, it was relatively easy to detain, deport, and destroy a massive amount of the Jewish population within a few short years.
CULTURAL RELEVANCE
Today our young people are experiencing very similar propaganda regarding equally important cultural issues. In science class they learn that life is the result of a cosmic accident and man is nothing more than an “enlightened” animal. Pervading nearly every aspect of society, humanistic thinking asserts that truth is relative and there is no such thing as absolute morality. Consequently, the pursuit for personal pleasure has become the chief end of a society that rejects the moral foundations given to us by God’s Word. Is it any wonder that human life is no longer sacred?
Since abortion was legalized in 1973, approximately 60 million babies have been slaughtered in the United States alone. School shootings have escalated. Domestic abuse is everywhere. Euthanasia is already happening. Standing in drastic contrast to the claims of our “progressive” society, the Biblical worldview continues to maintain that human life has dignity, because we were made in the image of God. It’s time to educate our culture in the truth!

Ignorance does not lead to bliss. It leads to a repeat of past atrocities.
Make sure you are passing along the truth to the next generation!