Skip to content
Home>All Categories>Blog>JOURNEY THROUGH GENESIS: WHAT CAME FIRST?

JOURNEY THROUGH GENESIS: WHAT CAME FIRST?

Was it the chicken or the egg? 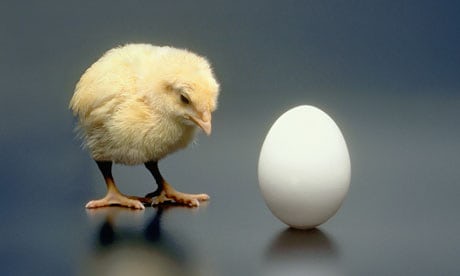 Since the time of Aristotle, philosophers, scientists, and school children have been baffled by the causality debate, wondering whether it was the chicken that came first; or the egg, which comes from a chicken. Ranging from hilarious to complicated, most answers to this question have failed to adequately explain the origin of one without the other. In an attempt to settle this dispute, Neil deGrasse Tyson, a well-known astrophysicist, once quipped, “Just to settle it once and for all: Which came first the Chicken or the Egg? The Egg — laid by a bird that was not a Chicken.”¹
Not only is Tyson’s response unprovable, it defies the repeated pattern of empirical science which asserts that all living things bring forth according to their own kind. A pregnant mother doesn’t have an ultrasound to discover what kind of mammal is growing inside of her. She knows she is having a human baby! Yet Tyson would lead us to believe that one day “something” laid an egg and a chicken hatched. But that’s not his only problem. Where did “something” come from and how was the egg fertilized? Further still, how did two chickens manage to hatch from this “non-chicken” so they could reproduce more chickens? The improbability is staggering!
To the creationist, this entire debate is frivolous. Reading the Creation Account in the first chapter of Genesis, we discover that God created full-grown birds instantaneously on Day Five of the Creation Week. Then God told the chickens to be fruitful and multiply. So, the rooster got busy. The hen laid an egg. Guess what hatched?
But causality isn’t the only dilemma facing the evolutionist. They also have a hard time explaining mutual symbiosis. From the Greek words meaning ”with” and “living,” symbiosis is a partnership between living organisms which is necessary for one or both of them to survive. Examples of this include plants which rely upon certain insects for pollination, and large fish which depend upon smaller fish and shrimp for their dental hygiene. 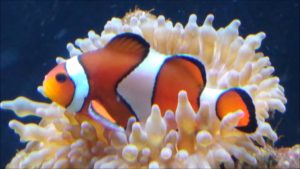 At the bottom of the sea, in sheltered reefs, the clownfish enjoys a symbiotic relationship with certain types of sea anemone. Feeding on small invertebrates which would harm the anemone, the clownfish is protected from its own predators by hiding among the stinging tentacles. Both organisms are highly dependent on each other. While the clownfish cleans and protects his prickly friend, the sea anemone provides a safe, protective home for its brightly-colored counterpart.
To the evolutionist, attempting to explain the survival and simultaneous adaptation of two species, this symbiosis is the result of a creative “force” which drives the two organisms forward.² Ironically, they have to infer a supernatural agent to explain this phenomenon! Yet, it isn’t difficult to observe that all of nature is brimming with creative design and pointing to an intelligence far beyond what we can see, hear, feel, smell, or touch.
So, what came first? Was it the chicken or was it the egg? Modern “science” claims the egg came first, but once again, the evidence supports what the Scriptures have been claiming since the very beginning.

“So God created… every winged bird according to its kind.
And God saw that it was good.” Genesis 1:21