Every few years, especially as an election approaches, the abortion “issue” resurfaces to garner either outrage or support from the masses. Everyone seems to have their own opinion to offer. Supporters are left wondering when their opponents will “get with the times,” while those who claim that abortion is murder are wondering when the slaughter of the innocents will end.

Recently, there has been growing optimism in Pro-Life circles that hints at victory. With a majority of Republicans in the Supreme Court, numerous states attempting to pass Heartbeat Bills, and the recent theatrical release of the “Unplanned” Movie, it is easy to hope that the end is in sight.

Those in favor of abortion are equally optimistic. While abortion in the past was a thing of shame to be hidden and denied, today’s participants are shouting and flouting their abortions with pride. A newer generation has risen with far less compulsions towards the moralism deemed to have kept our country in chains for so long. Abortion has become normal; it’s opponents antiquated.

Yet, what is abortion? Is it merely the expulsion of unwanted tissue, or is it the taking of a human life? For all the political rhetoric and dissent, the “issue” boils down to one simple question: Is the unborn child human, or something else? 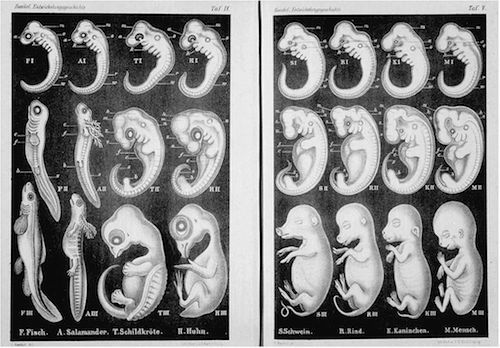 Less than ten years after Darwin published his famous book, “On the Origin of Species,” a German zoologist named Ernest Haeckel released his drawings of embryonic development which continue to influence the minds of many. Backing his theory on recapitulation, Haeckel contended for evolution by using his imagined development of the fetus through various “animal” stages.

Although quickly proven to be fraudulent, this theory has given rise to the ethical acceptance of human abortion by claiming that the fetus is not human. In spite of technology which allows us to view and hear our unborn children before birth, there are still many who view the unborn as a kind of parasite that begins life as a segmented worm then evolves through various stages like fish, amphibian, reptile, and pig-like mammal before finally developing into a creature that resembles a primate, but isn’t quite human. While scientific discovery has completely proven this theory to be false, the concept is still peddled to the masses through the teaching of evolution.

“As a physician, I know that human life begins with fertilization, and I remain committed to ending abortion in all stages of pregnancy. I will continue to fight this atrocity on behalf of the unborn, and I hope my colleagues will support me in doing so.” — Paul Broun

As Christians, we believe that every child is created in the image of God and that all human life is sacred (Jeremiah 1:5; Psalm 139:13-16). In the Old Testament the penalty for killing an unborn child was the same as that of killing any other human (Exodus 21:22-25). Therefore, God’s command to do no murder, also applies to them (Exodus 20:13).

Sixty-One Million… That’s how many abortions have been documented in America since it was legalized in 1973. Now close your eyes and observe a moment of silence with me. If you keep your eyes closed just one second per abortion performed, you would have to keep them closed for almost 2 years (Click To Tweet). It may seem like just an “issue” to a politician, but in the eyes of God abortion is nothing more than a slaughter of the innocents. May God forgive our nation for the blood on her hands!

“If it seems more horrible to kill a man in his own house, than in a field,…it ought surely to be deemed more atrocious to destroy a fetus in the womb before it has come to light.” — John Calvin