Evolution: the Theory of Demons?

Evolution: the Theory of Demons?

Today is the centenary of the death of Alfred Russel Wallace.

Alfred Russel Wallace! You know, the man who introduced the theory of evolution by means of natural selection and mutation, of course!

Wait a minute! That was invented by Charles Darwin, wasn’t it?

Sit down, while I tell you a tale.

Alfred Russel Wallace was born on January 8th 1823, so he was younger than the more famous Darwin. Unlike Darwin, he was not born into wealth and privilege. He was born in the small Welsh village of Llanbadoc, but grew up in London, Hertford, and then Neath. When he began to travel the world as a naturalist, he did so at his own expense, often collecting specimens to order to send back to Britain, in order to make enough money for his expeditions.

It was when he was on the island of Ternate in what is now Indonesia, in February 1858, that a radical idea came to him. It was the concept of evolution by natural selection and mutation. He wrote his essay, and wanted it to be seen by Charles Lyell, who was influential with scientific organizations in London. But he did not have the connection with Lyell, so he sent it to another naturalist, with whom he had corresponded a couple of times, and who he knew was acquainted with Lyell – Charles Darwin.

Darwin had, unbeknown to Wallace, been struggling with the possible mechanism for an evolutionary theory for many years. The sequence of events involving Wallace’s letter to Darwin are the subject of much controversy.

Darwin wrote to his friend Joseph Hooker on June 10th 1858 saying that he had cracked the problem of a mechanism for evolution. Darwin then claimed that he had received the letter from Wallace on June 18th 1858 – eight days after he had told Hooker that he had got the full details for his theory. 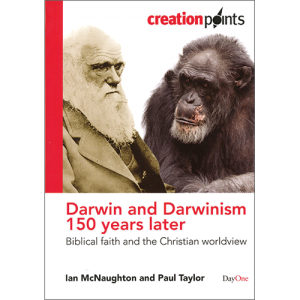 This article was based on pages 41 through 43 of my book Darwin and Darwinism, available at the Creation Store.

Wallace had sent his letter in February 1858. In the same bundle of correspondence, Wallace included a letter to a relative of his, who received his correspondence on June 3rd. This is 10 days before Darwin’s letter o Hooker. There are some people who suppose – and I have to say I incline to this view myself – that Darwin lied about the dates, and that actually his evolutionary mechanism was plagiarized from Wallace. In the event, Darwin’s idea and Wallace’s paper were jointly presented to the Linnaean Society in Wallace’s absence (he was still in Ternate) later in 1858. Darwin didn’t even have a proper paper; instead one was cobbled together from previous notes and letters. Nevertheless, Darwin’s scientific society connections and position in society meant that his was the primary name on the joint presentation, and he was able to rush the publication of his Origin of Species by 1859 – a work on which he had prevaricated for years. Such a lie would be in keeping with known flaws in Darwin’s character. It must be stated at this point that many creationists disagree with my conclusion on this point, and Wallace never showed any sign that he thought he had ben robbed.

However, if our presumption of plagiarism is correct, then the theory of evolution is Wallace’s, not Darwin’s. Darwin, who was practically an atheist, would not have been so open to outside manipulation of his thoughs, but Wallace was not an atheist; he was a spiritualist. He always thought that the evolutionary theory had come to him from his spirit guides. Suppose he was right! The theory of evolution is a deception from the devil. Maybe it was easier to get the idea into the mind of a man already open to demonic influence, who would then be able to present it to an unimaginative, atheistic society man, for acceptance by society at large. That is why it is useful today to remember Wallace and his contribution to evolutionism, because the religion of evolution is clearly the object of much of today’s spiritual warfare.