We’ve got issues, and the growing cultural issue of gender identity poses challenges for the Christian, the church, and the nation. But how do we approach this arena that is so personal and sensitive?

Jesus spoke words that offended many people. Those who had corrupted the truth found themselves on the receiving end of piercing words from the one who came to love the world. Some choose to accept the truth Christ offered while others were insulted. Does the same concept of demonstrating truth in love apply to our culture today? Or does the “just don’t go there” attitude work better?

The Gospel offers good news for every area of life.

As Christians, we must engage in questions our culture is asking. This includes being clear on what the Bible has to say about gender, and effectively sharing that the Gospel offers good news for every area of life. For example, Texas State Rep. Jessica Gonzalez, as mentioned in a recent Christian Headlines article, needs to hear and see Christians manifest the truth in love no matter how she chooses to respond. Read her cry below.

The “Save Chick-fil-A” bill was signed into law on Monday by Texas Governor Greg Abbott. Bill SB 1978 will protect businesses from being discriminated against by government entities because of their “membership in, affiliation with, or contribution, donation, or other support provided to a religious organization.”

The legislation came about in the lone star state after San Antonio’s City Council voted in March 2019 to exclude Chick-fil-A from the airport, in part due to the company’s donations to the Salvation Army and Fellowship of Christian Athletes, but mainly due to the false labeling of the organization as anti-LGBTQ.

District 1 City Councilman Robert Treviño shared that he believed excluding the Christian affiliated Chicken restaurant was the right call because “we do not have room in our public facilities for a business with a legacy of anti-LGBTQ behavior,” the Washington Times reported back in March.

Texas State Rep. Jessica Gonzalez (D-TX) – who is an openly gay woman – regarded the bill as a personal attack. According to CBN News, Gonzalez said, “Of course this bill is aimed at me.” She continued, “It’s about reminding those of us who have never belonged not to get too comfortable.” Another Texas State Rep. Celia Israel (D-TX) went as far as to say the law is all about “hatred.”

State Rep. Matt Schaefer (R-TX) voiced that the bill was necessary to protect people of faith.

“Should any city council be able to refuse me as a vendor in their city simply because I make donations to my church, which holds a biblical view of marriage?” he questioned.

First, let’s be clear. Chick-fil-A is not, and never has been, an anti-LGBTQ organization. Second, we rejoice that Governor Greg Abbott did the right thing by signing this bill into law. Our Founding Fathers wisely gave us our Bill of Rights and we thank God the very first one was written to protect our religious liberty. Governor Abbott’s actions reiterated this coveted right proclaimed in the US Constitution.

But let’s note the undertone of State Rep. Jessica Gonzalez’s statement. “It’s about reminding those of us who have never belonged …” Do you hear a longing in her soul to find a place to belong, to be loved? Garry & Melissa Ingraham of Love & Truth Network said it well in their March 2019 Update.

Acknowledging Our Failure to Invest in Gender Identity Issues

We must offer grace and truth for hopeless, defeated men, women, and youth bound in cycles of sexual sin, addiction, and identity confusion – nothing is impossible with God. He is still at work setting sons and daughters free to live out the good of His design for His image bearers.

We need to do more than affirm truth, we need to actually be the family of God. There is an order and design to God’s creation and a particular stewardship and responsibility given to humanity as the only creatures gifted to bear the image of God.  Throughout the creation process we see that God brings order and boundaries to what was unformed. During this genesis of all things, God established the foundation and origin of human flourishing; man for woman and woman for man – a biological family. This was and is His design and structure in which children most thrive. 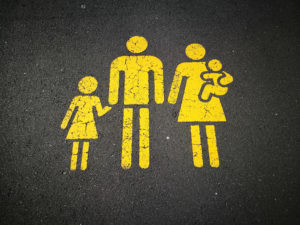 Further, we see God’s intention for spiritual family in Psalm 68:6, “God sets the lonely in families.”

of loneliness. God’s intention was and is that even in a sinful, broken world, where family isn’t always safe; where abuse, neglect, rejection, and abandonment are often experienced by children and adults, that His people (His Church) would be our second chance at family, a place where we can find home, where we can find belonging, a place to be loved. However, the modern day church in the west has become a very detached and sterilized form of “family.”

I don’t believe God’s idea of taking the lonely and putting them in families (Psalm 68:6) equates to attending church one or two hours on Sunday morning. Sadly, even many small groups, men’s groups, or women’s gatherings do not reflect the heart of God for the family He intends His Church to be.

The End-Game of Gender Identity Issues

Garry well knows the same loneliness that Jessica expresses having come out of the homosexual lifestyle himself. He also knows only God and His ways have true answers.

God’s laws are intended to let us live life to the fullest, not to punish us. But as free men, we can choose to rebel against God’s laws. The Old Testament records what happens to a society in which everyone does what is right in their own eyes. Sin, abuse, sexual immorality, and idolatry became rampant. Society sank so low that children were even burned alive to appease the Israelites’ false gods!

Satan is a liar, and the father of all lies. He doesn’t let us see the extreme cost of rebellion against God until its toll is paid. Broken hearts, broken marriages, hurt, divorce, disease, depression, guilt, and even death are the result of trusting the one who comes to steal, kill, and destroy (John 10:10).

What does the Bible say about gender identity? Genesis 1:27 says God made them “male and female.” No matter how disillusioned some people become, God clearly created the two genders. They are different in many ways besides physical. And no matter how far a culture descends away from God’s original design, the genders of male and female can’t magically be surgically, socially, emotionally, or mentally changed. For all the Jessica’s and all of mankind—that’s a good thing! HIS ways are perfect! Our sinful nature is what destroys God’s immeasurably magnificent plan that Manhood and Womanhood compliment each other.

Both male and female have the freedom to rebel against God’s design. We can try to deny the divine distinctness of genders, to tear down the uniqueness of the sexes; and to reject God’s wisdom and His Word. However, in doing so, we also renounce His blessing.

It is not enough to “speak” the truth in love,

we must “show” the truth in love.

Let’s show the truth in love by always loving the sinner while not condoning the sin. Let’s show the Jessica’s around us that God is gracious, quick to forgive, the Abba Father who offers a new life through repentance and surrender to His Son, Jesus Christ. This requires an investment from us.

While confusion is everywhere–even in churches–on the issue of gender identity, God’s Word remains steadfast and true. Let’s demonstrate true love to those stuck in gender identity crisis issues by investing time in their lives and sharing the authentic, true Gospel with them.