Did You See It?

This week, a “documentary” titled, We Believe in Dinosaurs, (embedded below) aired on PBS as part of their Independent Lens series. The 90-minute program seemed to be part-documentary and plenty of mockumentary. From a secular perspective, I get it… A guy named Ham built a life-size Noah’s Ark in the middle of the United States to teach people about the Bible… why not mock? Click HERE  to read Ken Ham’s response on Cincinnati.com – “Ark Documentary Another Hatchet Job” 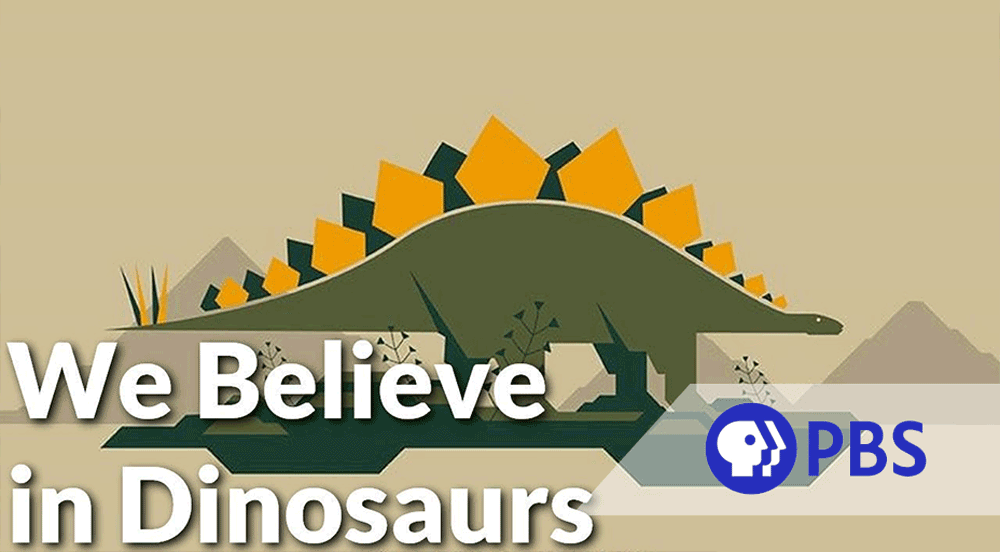 What was it about?

Focusing on the Ark Encounter in Williamstown, Kentucky, the film was shot over a four-year period including impressive behind-the-scene conversations with several AIG artists and speakers. Apparently, the producers gained their access by telling Answers in Genesis that the documentary would focus on the creative side of designing museum exhibits. Ironically, this very focus could end up being the film’s biggest blunder. Read on to see why. 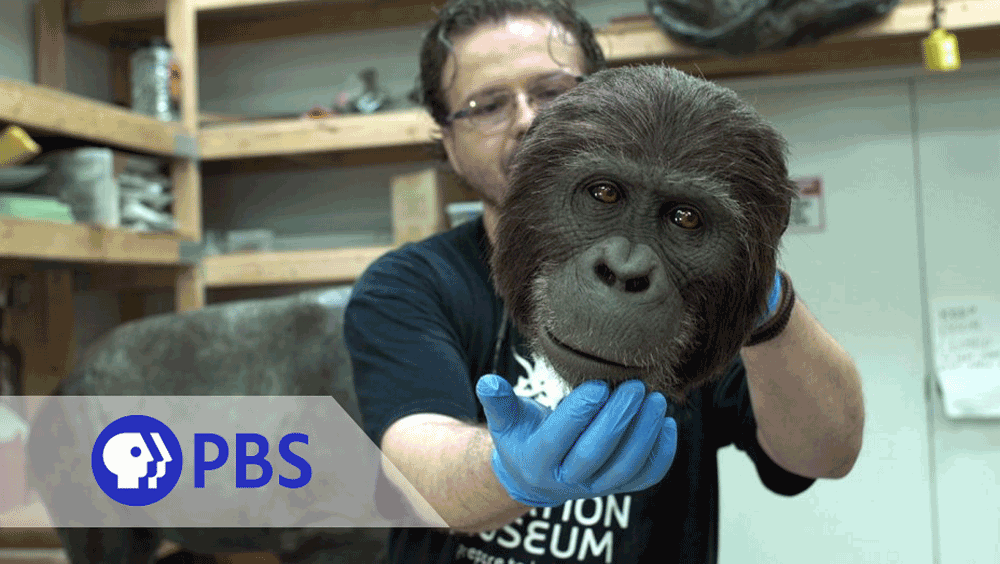 While the filmmakers may have wished to appear impartial, the repeated use of misinformation regarding tax incentives and the many direct and passive-aggressive shots fired at creationists betrayed any hope of fair-mindedness. The program featured former young-earth creationist David MacMillan, anti-creationist zealot and geologist Dan Phelps, and interviews with AiG’s Dr. Georgia Purdom, as well as members of the Ark Encounter’s design team prior to the opening of the Ark Encounter.

How do I know the filmmakers were anti-creationist? They displayed their bias several ways. These included subtleties such as when former young-earth creationist MacMillan spoke about his newfound belief in billions of years, the musical score was hopeful. But when he spoke of his past beliefs in creation, or when creationism was featured, the music became foreboding or hokey. More openly, MacMillan and Phelps were given plenty of time to explain their understanding of science, while Answers in Genesis’ microbiologist Dr. Purdom’s brief screen time focused only on statements about the Creation Museum and Ark Encounter attractions, but did not give any space to her scientific expertise. The same is true for all of the other creation scientists. While showing clips from the ICC (International Creationist Conference) featuring scientific peer-reviewed papers, presented by Ph.D creation scientists, the film used Phelps to narrate the untruth that creationists aren’t smart enough to understand real science. …. In reality, Creation Scientists were in the middle of presenting scientific studies! Worse than simple bias, this portrays downright deceit. Additionally, the film repeatedly sought to pigeonhole creationists as cultists rather than academic scholars. After you watch the film, (embedded below) you may want to consider a review on Amazon, Rotten Tomatoes and IMDB to let others know what they are going to encounter. 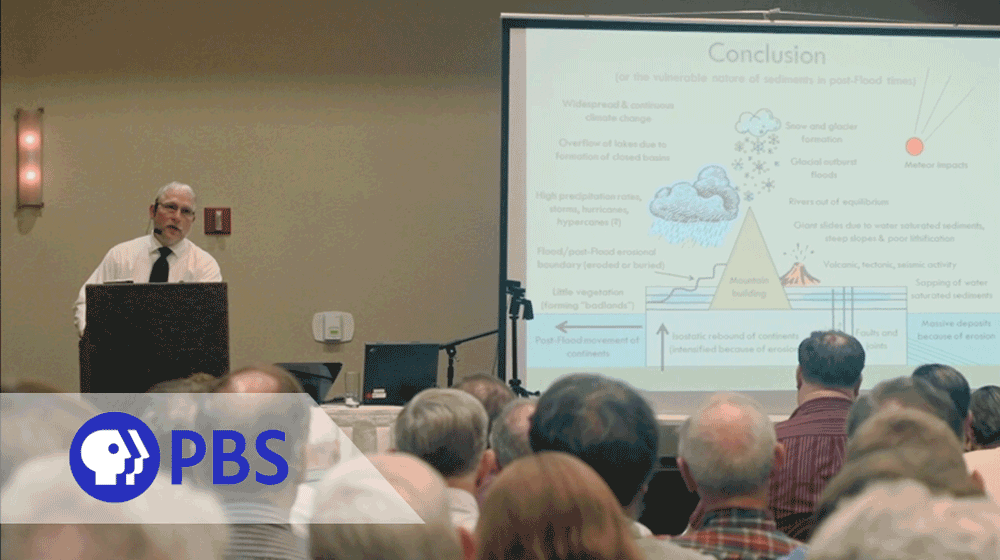 All These Scientists To Interview

To be fair, the film did show representatives of the Ark’s design team discussing their beliefs, and it didn’t seem to selectively edit their comments or yank them out of context, as the media frequently does to Creation organizations. However, it didn’t feature AiG’s scientists or other content experts from the creation perspective. Why didn’t they interview Tim Chaffey, the Ark Encounter’s Content Manager? Why not AIG’s Dr. David Menton/Ph.D. Cell Biology, Prof Emeritus of Anatomy at Washington University School of Medicine? Or how about AIG’s Dr. Danny Faulkner/Ph.D Astrophysics, Astronomy and Physics Prof University of South Carolina? How about interviewing AIG’s Dr. Andrew Snelling/Ph.D Geology University of Sydney, Australia? All these, just to name a few! 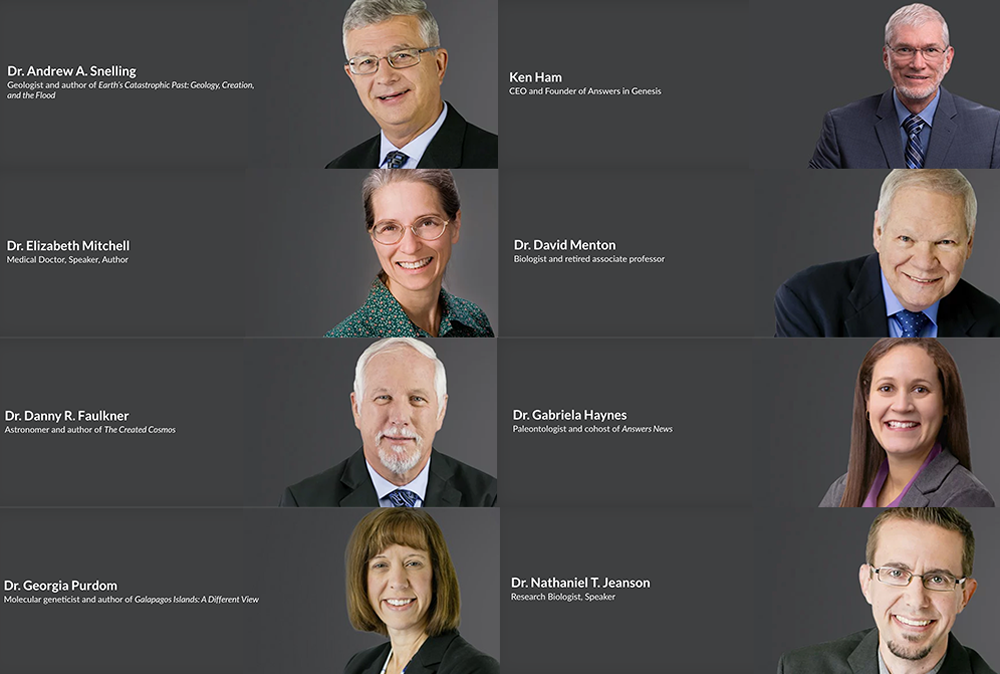 Instead, there were interviews with lead Exhibit Artist Doug Henderson and Patrick Marsh, the man who oversaw the Ark Encounter design. Thankfully, both incredibly well-spoken men expounded solid scientific facts to help the viewer understand why the Ark Encounter presents the biblical view as truth. It just seems odd that they were trying to pit “scientists” vs “artists.” Watch for yourself. Even the artists at AIG can hit home runs with their knowledge!

Clips from We Believe In Dinosaurs

In an attempt to steal the thunder from the Ark Encounter’s opening, several dozen atheists organized a protest for its opening day. When I heard about what they were planning, I had to make a few plans of my own! I decided to drive up to Williamstown with a crew to “Protest the Atheist Protest”. So exactly how did I protest? First, I brought some coolers full of Gatorade and water for the protesters. We knew it was going to be a hot day in Kentucky’s humid July heat, so I figured giving them a cup of cold water (Gatorade) would be appropriate. I even provided every color of the rainbow since they were protesting the Ark.

Then we ordered more than 100 chicken sandwiches from Chick-fil-A, since we knew they would get hungry. Ironically, the atheists made a sign that said, “Chick-Fil-A does not support LGBTQ rights,” and nearly all of them refused to eat the sandwiches. But more important than the food or drinks, I was there to share the gospel of Jesus Christ and answer any questions they may have had about Christianity and creationism. As I walked around that afternoon, I witnessed many Christians who came to share the truth in love with the atheist protesters. I knew God was pleased with our attempts to show the love of God to needy people. God’s Word says that is how it should be done. 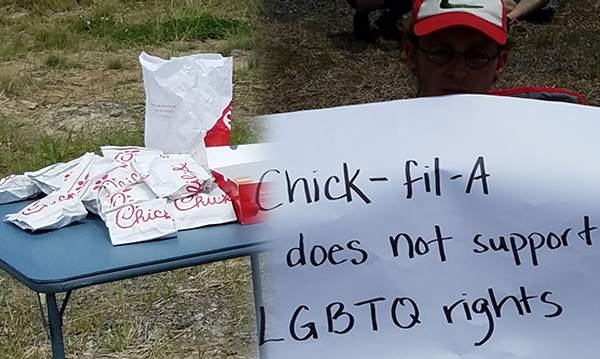 I called my friend, Tim Chaffey, the Ark Encounter Content Manager, to see if he wanted to talk to some of the protesters. I figured that if any of the protesters wanted to know what was actually taught at the Ark, they could ask the guy who wrote most of the signs. When I introduced Tim to them and let them know that he was available to answer questions, the “free thinkers” leader shouted, “Don’t ask them anything!” I have to be honest, that just didn’t seem very “open-minded” to me. The fact that the “free thinkers” leader urged his followers not to talk to any of the creationists seems more cultish than truth-seeking.

Taking Atheists On A Tour

Thankfully, some of the protesters ignored his admonition and conversed with us for nearly three hours. To top it off, Tim and I led more than 20 of the 60 or so protesters on a tour of the Ark—and the film never covered that! Throughout the tour, we engaged in great discussions and dug even deeper with an impromptu Q&A on the Ark’s third deck. 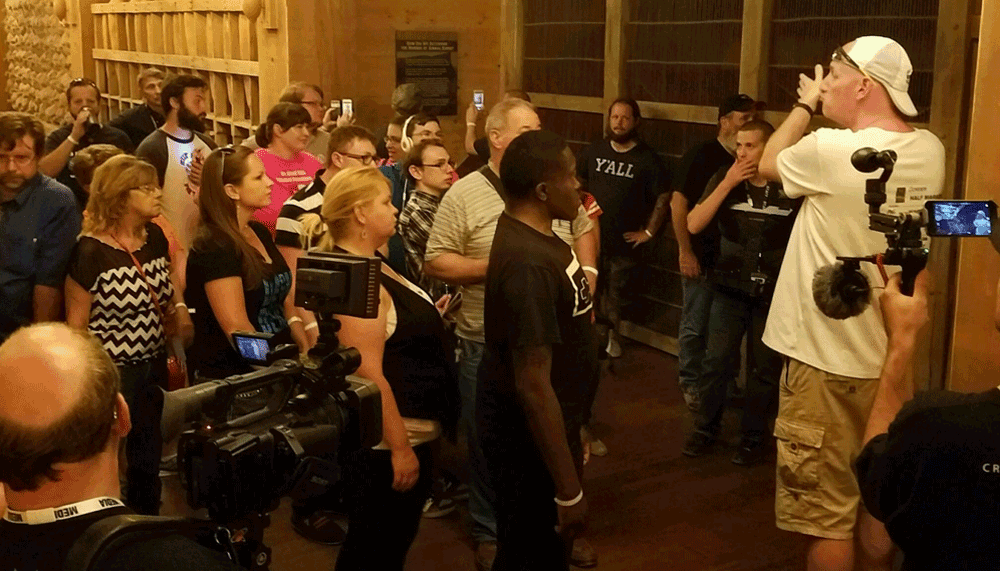 So, what’s my conclusion? I LOVE THE OPPORTUNITY TO PRESENT TRUTH TO THOSE WHO NEED IT MOST! PBS’ airing of this mockumentary is exactly what we should expect to see from the world. They misrepresented the Ark Encounter’s tax incentive and attempted to make Christians look foolish. Jesus made it clear in Matt 5:11-13, “Blessed are ye, when men shall revile you, and persecute you, and shall say all manner of evil against you falsely, for my sake.” I have heard it preached for years and it continues coming true. “What Satan means for evil, God can use for good.” I believe this film is some of the best FREE PUBLICITY that the Ark Encounter has ever received. PBS just aired a 90-minute special showing off Christians’ incredible artistry, unprecedented architecture, passionate love for atheists, and undying respect for the Bible’s ultimate authority. Can it get any better?

In terms of advertising, PBS reaches approximately 100 million viewers each month. If you were to air a 30-second commercial on ABC, you would expect to pay between $100,000 and $200,000 to reach their audience. Even conservatively speaking, it could cost $10,000 for a 30-second ad on PBS. THIS WAS A 90 MINUTE SPECIAL! That’s 180, 30-second commercials in a row totaling 1.8 MILLION DOLLARS IN FREE ADVERTISING! :-) Wow, God is good!

PBS, thanks for putting me on TV. Would you like a Tax Deductible Receipt for that?

Eric Hovind wants everyone to BE A HERO!

P.S. Hey, Ark Encounter Heroes! Keep up the amazing work! Here’s one more 30-second ad for you, and I won’t charge a dime!

Full Documentary “I Believe In Dinosaurs”